I have a confession to make, when I posted our Guest Bathroom Reveal way back here, we weren’t completely finished.  Sitting behind that white waffled shower curtain was a partially finished shower.  We had a few boo-boo’s and needed to finish up retiling an area, but I can say the guest bathroom is officially finished. 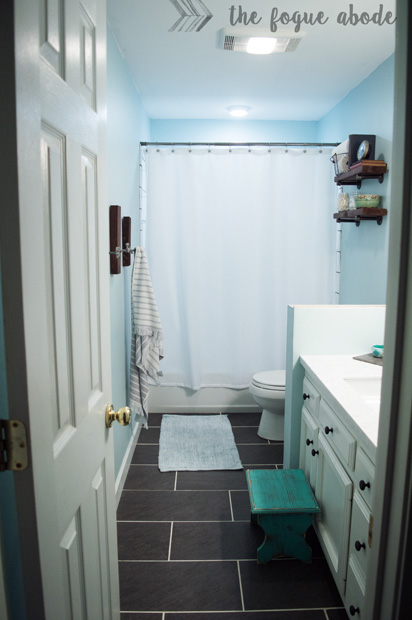 You see, we didn’t mean for it to take this long to complete.  We tore the original shower out, installed the new bathtub and then started tiling with these fabulous extra large subway tiles.  Then we hit a brick wall with the shower plumbing.  Well by we, I mean Chris.  Sorry to throw you under the bus, babe. 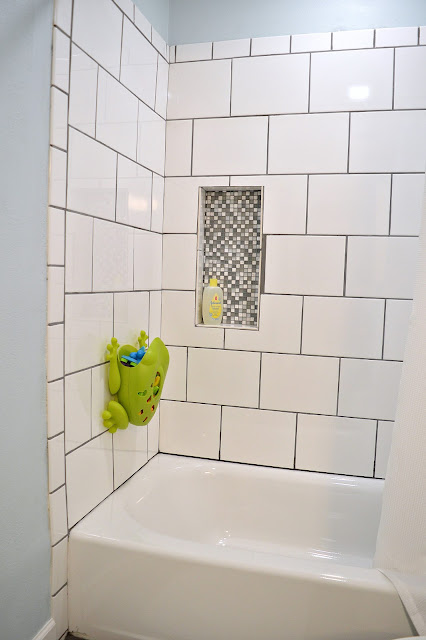 The not so pretty truth behind our guest bathroom remodel

What we thought would be a rather simple DIY turned into a rather difficult problem.  A problem we let sit for months before finally getting the courage to bust out the tiling Chris had already done.  The problem we faced was some loose plumbing, a DIY newbies error of epic proportions.  Well not as epic as that time we flooded the bathroom.
Then, a few more months toiled by as we let it sit before actually fixing the plumbing issue and re-tiling it.
But our problems didn’t stop there.  At this point, it had been over a year since we purchased all of our plumbing supplies and we couldn’t find the exact color grout we had originally used.  That led us on a guessing game, and you guessed right, we guessed wrong.  So out had to come that grout and we had to buy the other color which then ended up being correct.
Whew, is your head spinning yet? 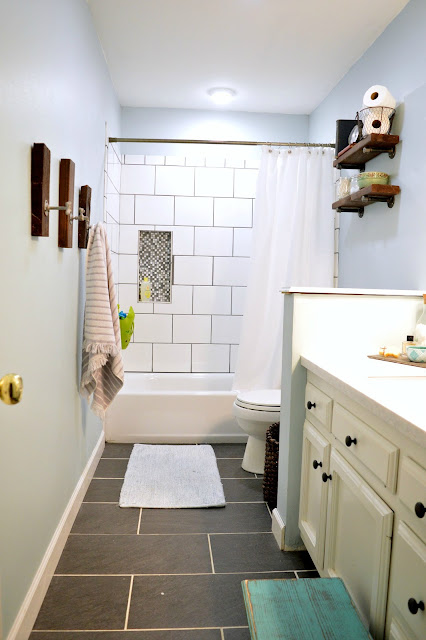 A few more months drug-by and thanks to my step-dad for coming and helping Chris install the drain under the house. We officially have a working shower for the kids and guests!

And that kids is how a guest bathroom remodel turned sour.  This project officially took 22 months to complete.  But if you asked me, this project was so worth it.  The finished room looks fantastic and our guests love the updated fixtures and look.